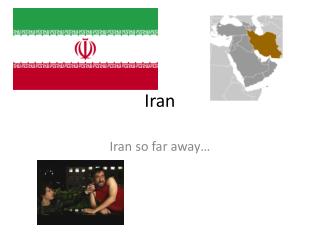 Iran. Iran so far away…. Iran used to be Persia. Until 1935 Became an Islamic Republic in 1979. Facts:. Capital: Tehran Government: Theocratic Republic A religious leader (for life) A democratic leader (elected for a max of 8 years) Law: Sharia Muslim holy law