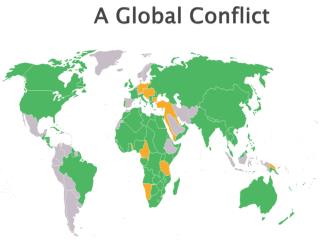 A Global Conflict. WWI more than a European conflict Australia and Japan fought with Allies India supplied troops to British Ottoman Turks and Bulgaria fight with Central Powers New allies and war fronts around the globe. War Affects the World. Allies look to attack the Dardanelles

THE BATTLE OF GALLIPOLI - . ww1 1915. the basics. britain and germany are on opposing sides of the war germany is allied

Chapter 21 WORLD WAR I - . section 1: world war i breaks out section 2: the united states goes to war section 3: the war

Global Terrorism - . what is terrorism ?. in most cases deliberate and systematic use of violence against civilians, with

Chapter 30 A Second Global Conflict and the End of the European World Order - . by: samantha schultz and renata narvaez.

World War I - . marching toward war . rising tensions in europe the rise of nationalism by 1907 europe was split into two

Congo, Africa’s World War Why is it a World War? - . forgotten crisis conflict and humanitarian crisis have taken the

Causes of World War I : - . imperialism. nationalism. militarism. system of alliances. the assassination of franz

The Ingredients for War : - On 28 june 1914, a localized event will evolve into a european war, and, eventually, a global

A Second Global Conflict and the end of the European World Order - . old and new causes of a second world war.

A World at War - The tide of war turns to the allies. a world at war. allied victory in north africa and italy.