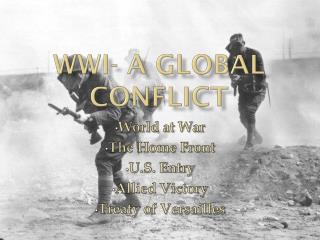 WWI- A global Conflict. World at War The Home Front U.S. Entry Allied Victory Treaty o f Versailles. The War Goes Global. As the Stalemate in Europe dragged on, many additional nations joined the war effort hoping to better their own world standing if victorious.

CONFLICT MANAGEMENT 1+2 - . elements of conflict. definition. conflict is an expressed struggle between at least two