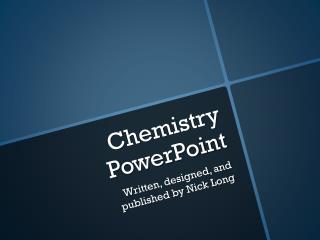 Chemistry PowerPoint. Written, designed, and published by Nick Long. Ph stands for the potential of hydrogen. It is used to measure the acidity or basicity of a solution. The scale ranges from 0 to 14 where 0 is extremely acidic and 14 is extremely basic, 7 is neutral. . Ph.

Chapter 2 – Chemistry - . why study chemistry in biology?. chemical changes in matter are the foundation for all life

History of Chemistry - . alchemy?. what is alchemy?. alchemy is the ancient art of trying to achieve wisdom and

HL Chemistry - Option A: Modern Analytical Chemistry - . atomic absorption spectroscopy. a.6.1 state the use of atomic

CARBOHYDRATE CHEMISTRY - . dr amina tariq biochemistry. introduction. carbohydrates are one of the three major classes of

Chapter 18 Chemistry of the Environment