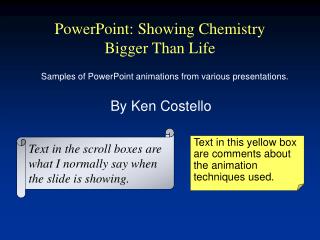 PowerPoint: Showing Chemistry Bigger Than Life. Samples of PowerPoint animations from various presentations. By Ken Costello. Text in the scroll boxes are what I normally say when the slide is showing. Text in this yellow box are comments about the animation techniques used.

Organic Chemistry - . c hemistry. chemistry is the study of the substances, specially their structure, properties,

Unit 1: The Chemistry of Life - . chapter 2. atoms combine to form molecules. energy is the capacity to do work joining

Dick Kovacevich: You don’t get better by being bigger. You get worse.” - “i am often asked by would-be

Origin and Evolution of Life on Earth (Week 5) - . searching for the origin functional beginnings of life focus on