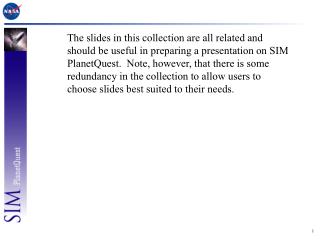 The slides in this collection are all related and should be useful in preparing a presentation on SIM PlanetQuest. Note, however, that there is some redundancy in the collection to allow users to choose slides best suited to their needs. Studying Planets – Challenges to Overcome. Which of the following CANNOT overcome an object’s inertia? - . a) an unbalanced force b) a zero net force (balanced

DLHE advanced - . 2012. objectives. methodology recap and reflect on the methodology questionnaire and data review the

The Jovian Planet Systems - . totally different planets than our familiar next door neighbors! the formed beyond the

Inventories - 0. 7. inventories. 0. after studying this chapter, you should be able to:. describe the importance of

Astrologers with an old paltry cant and a few pothooks for planets to amuse the vulgar, have too long been suff - Ered to

The average distance from Earth to the sun is - . 1 ly 1 million km 1 million mi. 1 billion km 1 au. a typical galaxy

Studying for the AP Bio Midterm 2011 - . answer key. which of the following organelles is the site of cell respiration?

Chapter 11 Jovian Planet Systems - . 11.1 a different kind of planet. our goals for learning are jovian planets all

Jupiter and Saturn - . reminder - terrestrial and jovian planets. the four inner planets are the terrestrial planets