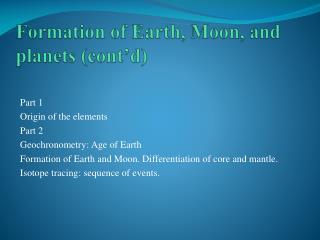 Formation of Earth, Moon, and planets (cont’d). Part 1 Origin of the elements Part 2 Geochronometry : Age of Earth Formation of Earth and Moon. Differentiation of core and mantle. Isotope tracing: sequence of events. . What have we learned so far?. Universe expanding Age 13.5 Gyr Chapter 28 Review - . our solar system. what force draws the matter in an interstellar cloud together to form a star?.

Moon Phases - . if you watch the moon from night to night you will notice that it seems “wax” larger from a new moon