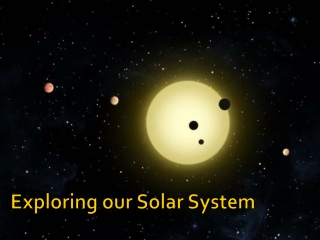 Chapter 13 Exploring Our Galaxy - . our location in the milky way. the milky way galaxy is a disk-shaped collection of

Solar System Research Project: The Sun - . nancy chen core: b/2. description. the sun is actually a star. the temperature

Compare the planets in our Solar System! - . compare our planets to the sun!. compare our star (the sun) to other nearby

SPACE PENETRATORS FOR SOLAR SYSTEM EXPLORATION - . igone urdampilleta. 29 may 2014, ucm, madrid. contents . what is a

The Origin of Our Solar System - . the great chain of origins and origin hypotheses (nebular hypothesis). objectives.

7.5 Other Objects in the Solar System - . comets, dwarf planets, meteoroids and asteroids are other important objects in

Our solar System Consists of nine planets. -can anyone name the order they are in from the sun? - Hello. my name is

The Planets In The Solar System - . by: zara. mercury. the first planet 3,032 miles across has zero moons eight planet in

The stability of the solar system - . texpoint fonts used in emf. read the texpoint manual before you delete this box.: a

Looking at the Geology of Planets and Moons in Our Solar System - . psc 121 follow-up to activity “exploring the

Exploring the Solar System: all about spacecraft/spaceflight - . how can we explore the solar system? - types of space