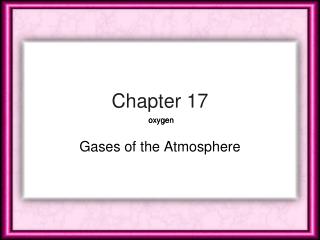 Chapter 17. oxygen. oxygen. Gases of the Atmosphere. The industrial importance of Air. Critical as a raw material to the chemical industry Individual gases from air have many uses. Separation of Air. Gases in the air may be separated by fractional distillation Chapter 17 - Foreign and defense policy: protecting the american way. chapter 17. we the people of the united states, in