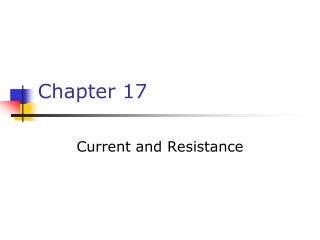 Chapter 17. Current and Resistance. Example 17.3 – Page 578. A) Calculate the resistance per unit length of a 22-gauge nichrome wire of radius 0.321mm. B) If a potential difference of 10V is maintained across a 1m length of the nichrome wire, what is the current in the wire? Chapter 17 - . current and resistance. bright storm on electric current. read and take notes on pages 531-534 in