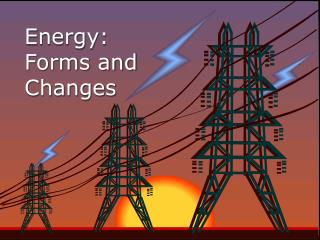 ENERGY - . what is energy?. energy is the capacity to do work or to produce heat. forms of energy. energy comes in many

Forms of Energy - . electrical energy is changed to. mechanical energy and then to…. heat energy. what type of energy

ENERGY - . core. demonstrate an understanding that an object may have energy due to its motion or its position, and that

Important forms of energy How energy can be transformed and transferred Definition of work - Chapter 7 energy. important

The Eight Forms of Energy - . energy can neither be created nor destroyed most the energy on our planet comes from the

Energy: its forms and uses - . what is energy? energy is defined as; the ability to do work or cause a change . energy

Types of Energy and Forms of Energy - . energy . energy exists in many forms. energy can be moved from one object to

Types of energy 7 forms of energy Energy Resources How Electricity is produced - . energy for human use. 2 types of

What is energy? - Week 13 skip a page in your crct notebook. what is energy?. a feeling of power the ability to cause

Falling in Love with Forms [Web Design Day] - Forms. without them, the web would not be what it is today, but they are