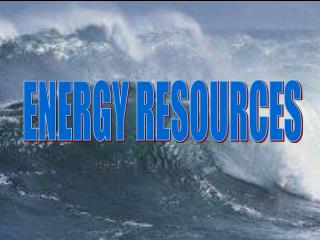 ENERGY RESOURCES. What is Energy?. The ability to do work. We use energy to do a lot Here’s the breakdown of how it’s used:. Where does our energy come from?. Can energy be “made”?. The 1 st law of thermodynamics says that…. ENERGY CAN NOT BE CREATED NOR DESTROYED.

Chapter 7 Energy and Energy Balances - . 7.1 forms of energy: the first law of thermodynamics. the total energy of a

CLEANTECH – ENERGY AND ENVIRONMENTAL TECHNOLOGY - . like a glowing focal point, the question of how we should use our