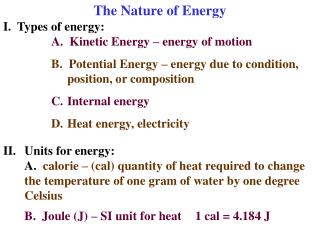 The Nature of Energy I. Types of energy: A. Kinetic Energy – energy of motion B. Potential Energy – energy due to condition, position, or composition Internal energy Heat energy, electricity. Units for energy: Science Standards Review: Energy - . s8p2. students will be familiar with the forms and transformations of energy. . a.

Chapter 5 Ground Rules of Metabolism Sections 1-5 - . energy. we define energy as the capacity to do work one form of

8 TH GRADE ENERGY UNIT - . what is energy ?. energy – the ability to do work or create a change. law of conservation :