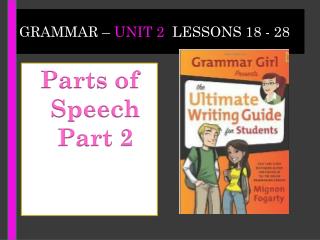 Unit 4 Grammar - . discussion. could you tell us something about what we learned in the last period?. work out the rules.

Unit 1 Grammar Week 2 - Lewis and clark and me. unit 1 grammar week 2. imperative and exclamatory sentences. an

Unit 2 grammar and usage - . let’s know about the future events. china will be holding the olympic games in 2008. you

Grammar Bellringer #18 - . what is a run-on &amp; comma splice?. run-on vs. comma splice. a run-on is a grammar error

Unit 3 Week 2 Grammar - . adelina’s whales. main and helping verbs. a verb that has more than one word is called a verb

Grammar Unit - . adverbs. let’s review . . . the adverb is the fifth of the eight parts of speech. just for the record,

Grammar Mini Lessons - . textbook unit 1. nouns. a noun is a word or word group that is used to name a person, place,

Grammar unit - . what is a clause?. clause : a word group that contains a verb and its subject, which can be used as a

Grammar Mini Lessons - Short story unit. grammar mini lessons. nouns. a noun is a word or word group that is used to name

Grammar Unit - . pronouns. let’s review . . . the pronoun is the second of the eight parts of speech. just for the