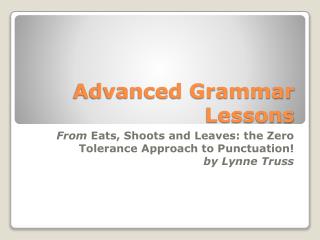 Advanced Grammar Lessons. From Eats, Shoots and Leaves: the Zero Tolerance Approach to Punctuation! by Lynne Truss. ‘ ‘. Apostrophes in Da Hizzouse !. It indicates a possessive in a singular noun: The boy’s hat

Write through Applying Grammar Rules - . leave out the words that can be omitted in the following sentences. the students

GRAMMAR FOR READING - . geoff barton sunday, october 12, 2014. www.geoffbarton.co.uk. grammar for reading is … about

What is an antecedent? - Vague pronoun reference: unexpressed antecedents and ambiguous and implied references

GRAMMAR - . oh, goody -- grammar. who needs it? students, that's who. as i endlessly sit and correct papers, it is

IDB 157 # 2 - . grammar types of grammmar universal grammar s. nalan büyükkantarcıoğlu. what is grammar ?. what is

All the Grammar Rules you need - . :because most of the research shows that you can’t really teach it anyways. why

Welcome to the Maltese Class - . ms josepha spiteri. lessons. there will be 5 lessons a week: lesson 1: grammar ( stilel

Revising Grammar - Grammar. revising grammar. what is grammar?. essentially, grammar is the set of rules used to ensure

Welcome to the Maltese Class - . ms josepha spiteri. lessons. there will be 5 lessons a week: lesson 1: grammar ( stilel