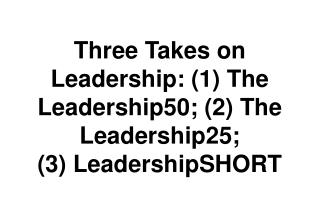 Leadership - . leadership. what style of leader am i? what are my strengths/weaknesses? are my methods effective?.

360° Leadership: Leading UP, Across, and Down from anywhere in the Organization - . rccd leadership academy may 3, 2013.

MODULE 16 LEADERSHIP - . “a leader lives in each of us” . what are the foundations for effective leadership? what are