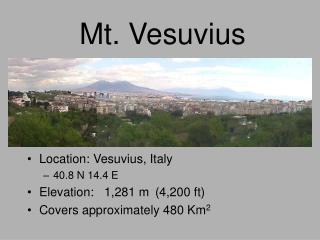 Mt.Vesuvius burying Pompeii - . by:juliannah workman. learning target. i will use primary and secondary sources to

The Eruption of Mt. Vesuvius in AD 79 - . why vesuvius?. mt. vesuvius lies on a fault , a break in the earth’s crust

Pompeii Diaster - . where?. pompeii. the site of pompeii is located in western italy in a region called campania, near