The Eruption of Mt. Vesuvius in AD 79 - PowerPoint PPT Presentation 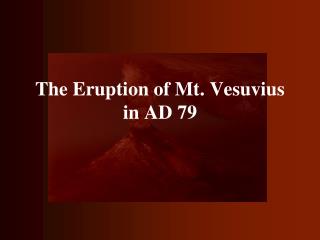 The Eruption of Mt. Vesuvius in AD 79 The Eruption of Mt. Vesuvius in AD 79

Pompeii Diaster - . where?. pompeii. the site of pompeii is located in western italy in a region called campania, near

By Oliver Jordan - Pompeii. by oliver jordan. introduction. pompeii was a roman city that sat in the shadow of mount