What is reading ? - PowerPoint PPT Presentation 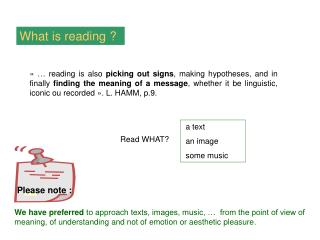 What is reading ?. « … reading is also picking out signs , making hypotheses, and in finally finding the meaning of a message , whether it be linguistic, iconic ou recorded ». L. HAMM, p.9. a text an image some music. Read WHAT?. Please note :.

Towards Reading - . strategies. towards reading. try to provide a positive, productive period to contribute actively to