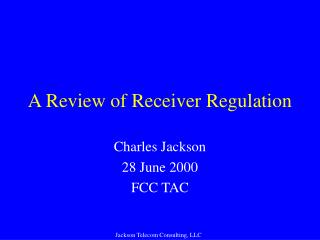 A Review of Receiver Regulation A Review of Receiver Regulation

Two-Way Communications - . exchange of information during the review process between regulatory authority and sponsor.

Receiver Systems - . alex dunning. the basic structure of a typical radio telescope. they are much the same.

Which GPS Should I Buy - . tips to buying a gps for mapping . garmin. pro xr. geoexplorer 3. trimble. joel cusick alaska