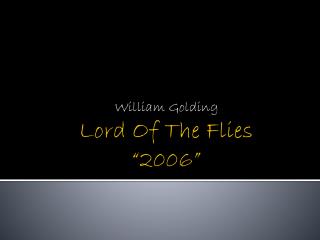 William Golding . Lord Of The Flies “2006”. Setting & Significance . Setting- This novel takes place upon this island in the South Pacific during a war. The island was uninhabited except for the boys who survived the plane crash.

Lord of the Flies review - . the first boy to try to kill a pig in chapter 1. the very first boy to die on the island.

Lord Sesshomaru - . and one mans blade. bloodstained mononoke. “ jaken revived ”. r: lord sesshomaru i see you have a

主耶和華已揀選了錫安 - . lord, jehovah, has chosen zion. 作我主尊貴的居所. has desired it for his

Lord of the Flies - . by william golding. big question. are people naturally good but sometimes do evil, or are people

P: The grace of our Lord + Jesus Christ and the love of God and the communion of the Holy Spirit be with you all. C:

What The Lord Desires A Local Church Should Be - . as christians, we need to make sure we desire the same type of local

The Jolly Roger Flies! - . a brief history of piracy. what do you know about pirates?. did pirates have parrots? sure.