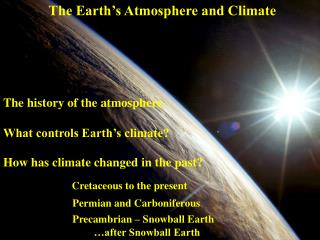 The Earth’s Atmosphere and Climate The Earth’s Atmosphere and Climate. The history of the atmosphere. What controls Earth’s climate?. How has climate changed in the past?. Cretaceous to the present. Permian and Carboniferous. Precambrian – Snowball Earth. …after Snowball Earth. After Earth formation…….

The Earth’s Atmosphere and Climate

The Characterization of Atmospheric Particulate Matter - . richard f. niedziela depaul university 16 may 00. the

CREATING AN ATMOSPHERE OF RECOVERY - . what is an atmosphere of recovery? atmosphere “a particular environment or

Objectives understand differences between ocean and atmosphere that cause the ocean to be the “memory” of the - Stem.