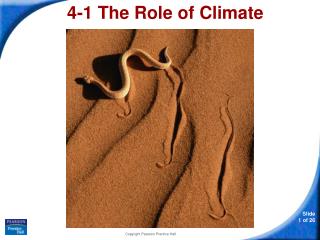 The CSS Role in a Changing Climate - . sandy otto june 18, 2008 fhwa environmental conference. what is

ROLE OF THE INDIAN AND ATLANTIC OCEANS ON THE CLIMATE VARIABILITY OF EASTERN AFRICA - . charles c. mutai kenya

Role (or potential role) of the indicators of sustainable development for climate change policy and analysis - . a costa

Land use conflicts in the Inner Niger Delta of Mali: Does climate change play a role? - . tor a. benjaminsen koffi alinon

Marine research and the role of the shipping industry - . peter hinchliffe w ith thanks to: oceanscope and. the

What is the role of palaeogeography across the Cretaceous and Paleogene? - Modelled insights into climate dynamics of the

Weather and Climate - . bellringer: describe how the water cycle plays a role in weather. compare and contrast