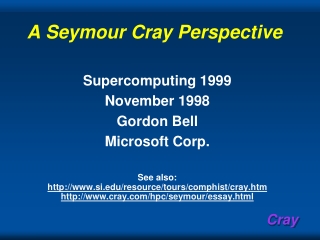 Beatniks By: Cameron Seymour - &quot;nobody knows whether we were catalysts or invented something, or just the froth

High Performance Computing &amp; Bioinformatics Performance Nick Lindberg - . “if you were plowing a field, which

The Adventures of Super Seymour - . our adventure begins in the middle of the pacific ocean, mild mannered seymour sea

Implementing a Global Address Space Language on the Cray X1 - . christian bell and wei chen. why upc on the cray x1 ?.

Today, A Gameboy for $50, has more computing power than a Cray supercomputer of only 25 years ago. - Today, a gameboy for