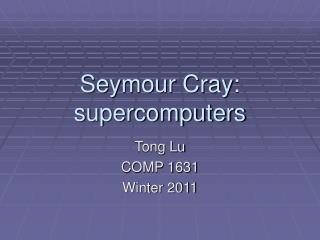 Numerical Weather Prediction - . a bit of history. nwp was born at the institute for advanced study in princeton in

Towards Scalable Checkpointing for Supercomputing Applications - . alison n. norman, ph.d. the university of texas at

What Do All of These Means Mean? - . indices of central tendency sample mean median mode other means arithmetic harmonic

ICS124 Session 3 Data Representation - . 1. review quiz. 1) the most powerful computers are: a) super

Pioneer Ministry - +graham cray. pioneer ministry. new context - new gift mix. the gifts he gave were that some would be

What is MCSR? - . who is mcsr? what does mcsr do? who does mcsr serve? what kinds of accounts? why does mississippi need