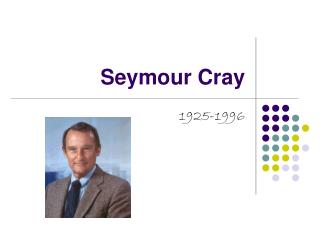 Seymour Cray. 1925-1996. What’s the person full name and who were their parents?. Seymour Cray His father was a civil engineer who spent the earlier years of his career working for Northern States Power Company. His mother provided his father with a social life to balance his technical job. Seeds to Symmetry to Structure: Crystallography and the Search for Atomic-Molecular Arrangement - . seymour mauskopf

What is an algorithm? - . algorithms are the ideas behind computer programs. an algorithm is the thing which stays the