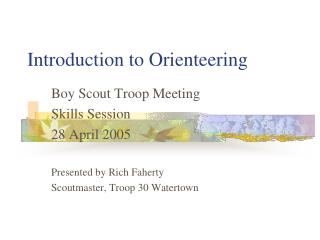 Orienteering - . the only sport where the weaker can beat the stronger. “ orienteering ” comes from the swedish word

CHALLENGES of the PHYSICAL TRAINING in ORIENTEERING - . janne salmi lapua, 15.6.2007. orienteering is… an

What are Orienteering Victoria’s income sources? - . source: 2010 orienteering victoria annual report. how does

Orienteering “The Thinking Sport” - . what is orienteering?. sport of using a map and compass to navigate a set