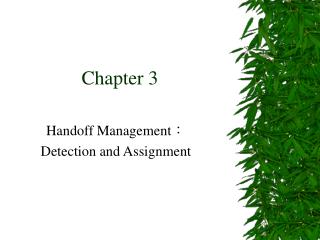 Chapter 3. Handoff Management ： Detection and Assignment. Introduction. Discuss the handoff procedure in detail. This discussion is general, which applies to both high-tier cellular systems and low-tier pedestrian systems , in both indoor and outdoor environments. Handoff.

Collision Detection - . csce 441. what is collision detection?. given two geometric objects, determine if they overlap.