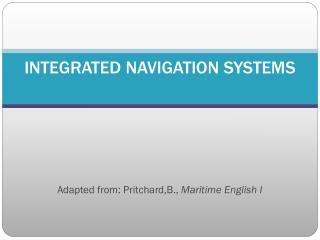 Development of An Integrated GPS/Loran Prototype Navigation System for Business and General Aviation Applications - . by

Navigation Framework using CF - . architecture for a client-server application using the open standards of the web.

Navigation Systems - . 2013 goals and objectives with voice over commentary on each slide. click on the icon to hear the