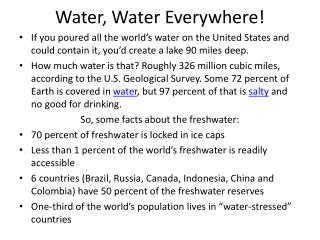 Water, Water Everywhere!. If you poured all the world’s water on the United States and could contain it, you’d create a lake 90 miles deep. Salt Water vs. Fresh Water - . make a hypothesis about salt water and fresh water. make a prediction in words and

Water &amp; pH - . dr amina tariq biochemistry. water is essential for life. it covers 2/3 of the earth's surface and

Taharah wa Wudu Water - . the shariah has divided water into 4 kinds:. mutlaq water. considered pure because of its

Water Cycle - . and its different processes collins . what is a water cycle?. also known as hydrologic cycle, water cycle