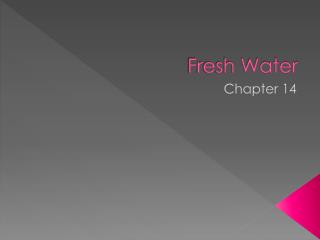 Fresh Water. Chapter 14. Section 1 Water and Its Properties. Objectives: Describe the amount of fresh water on earth Relate the structure of water molecules to the physical and chemical properties of water Explain why living things need water

Water Scarcity Is An Opportunity for Water Efficiency - It’s not a widely published fact, but that’s no reason why it

Water Textbook 7.1 and 7.2B - . the hydrosphere is all of the waters on earth. water makes up ¾ of the earth’s

NUTRIENTS - . page 147. water. is the most important nutrient for any pet! they can go for long periods without food but

Ice - You can go skating on ice, and that can be fun. but what is ice? ice is very, very cold water! water is made up of