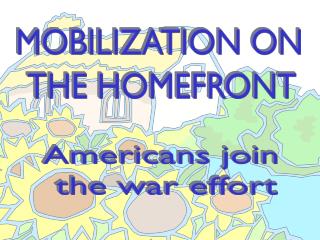 Supporting the War Effort - . what steps did the u.s. government take to prepare the nation for war?. building the

The War Effort At Home - . chapter 18 section3. emancipation. although lincoln personally hated slavery. the purpose of

The War Effort at Home - . what do you think of the united nations?. the un spends between 5-6 b illion dollars a year.

The War Effort at Home - . mobilization. a. mobilizing the economy. -u.s. gov. needed to raise large amount of money for

Americans At War - . americans change the war. no one in europe was sure how the united states would impact the war

African Americans and the War - . chapter 4, section 2. i. the push toward emancipation. a. enslaved african americans

Americans at War Mobilization-Americans get ready for war! - --fdr understood that the outcome of war in europe depended

World War One The Homefront and the War Effort - . chc2d8 ms. gluskin. day 1 – did the government rise to the challenge

World War II: Americans at War - . i. mobilization. bell ringer. pretend you are president roosevelt. what are the