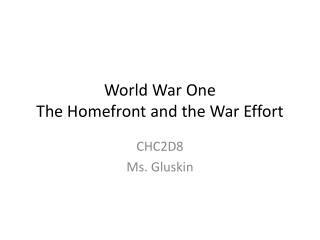 World War One The Homefront and the War Effort

World War One The Homefront and the War Effort

The Home Front - . the main idea while millions of military men and women were serving in world war ii, americans on the

WOMEN AT WAR AND WAR ON THE HOME FRONT - . women at war just as they had done during world war i, women played a vital

The Home Front During WWI - . how did world war one change the lives of the british people?. the home front. recruitment

Women During WWI - . before the war. seen for “traditional” roles and duties. recognized as objects of beauty, not

Women During WWI - . women and the war effort. look at the following primary sources and infer – what do they tell us

The Home Front: How did Americans on the home front support the war? - . warm up:. how do americans who are not on the

War on the Home Front - . women’s rights the conscription crisis the election of 1917. the struggle for women’s

The Home Front and the Aftermath of World War II - . chapter 26.4. mobilization in the u.s. the war effort required all

The Home Front During World War I in the United States - . * today’s focus will be on the mobilization of the united

World War I - . the home front. selective service act. prior to american entry into the war, the u.s. had a volunteer

Contributions from the Canadian homefront (ww2) - . rationing. total war: all industries, materials, and people were put