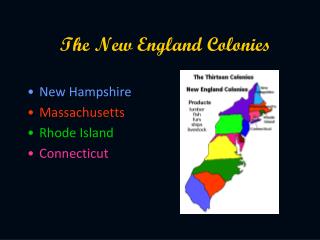 The Original 13 Colonies - . reasons why england valued its north american colonies. 1. the colonies supplied food and

Discomfort in the Colonies - . the american dream. at first england ignored its colonists charles xii became king of

Comparing the Colonies - . how were the three colonial regions alike and different?. 7.1 introduction. more colonies in

England and Its Colonies - . mercantilism a nation’s power comes from its wealth. self sufficiency through trade and

13 English Colonies - . british control. the king of england had final authority because he granted the charter.

3.2 New England Colonies - . how did they get started?. with the . why did the pilgrims come here?. they didn’t want to

New England Colonies - . new england colonies. colonial life here is almost polar opposite than in the south. who settled

Chapter 3 Sec. 3 - . the colonies grow. i. england and the colonies. in 1660 england had two groups of colonies: the new