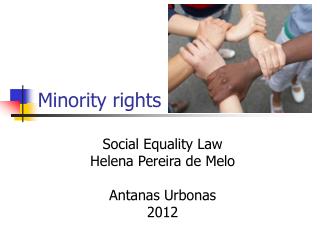 Multiculturalism in Liberal Democracies: The bounds of intervention in practices of minority cultures - Raphael cohen-

Minority influence - . conformity research suggests that the majority exerts an important influence however, if the

LANGUAGES AND COLLECTIVE RIGHTS - . what is an official language minority what rights does the ccrf give official

Women and equality - . presentation by victoria and ethan. many women who fought for civil and workers’ rights later

The Civil Rights Movement in the 1950s - . i.wwii as a catalyst for civil r ights. opened new labor opportunities for