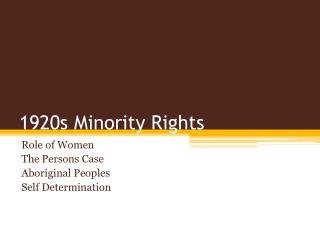 The University of Utrecht April 2nd, 2007 - . the minority concept in ottoman empire and turkey baskin oran

Minority Groups and the New Deal - . note down the positive and negative consequences of the new deal for each group on a

The Amish in America - . group 2 legal history of minorities supervisor: christian häthén. history of the amish.

The impact the great depression had on African Americans, women, and other minority groups - . by : andy morris ty

The Roaring 20s: A Clash of Values - . ch 7.1. discussion questions. what is a recession? do economic recessions increase

The 1920s - . 1920s politics. “return to normalcy” is challenged by the legacy of the progressive movement and