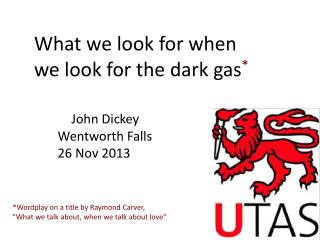 Growing Neutrinos as a solution of the why now problem of Dark Energy - . connection between dark energy and neutrino An argument that the dark matter is axions - . pierre sikivie center for particle astrophysics fermilab, march 17, 2014

Constraining the Dark Side of the Universe - . j aiyul y oo d epartment of a stronomy , t he o hio s tate u niversity.