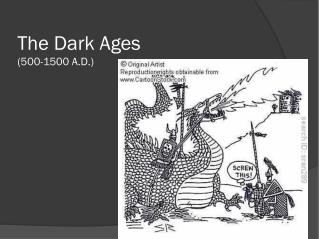 The Dark Ages (500-1500 A.D.). So Why So “ Dark ”?. Feudal System The Church & the Monarchy dictated your life-what money you had went to the church Little value placed on human life, torture and violence were acceptable Unsanitary conditions caused many to die from disease. Middle Ages/Medieval Theatre - . 500-1500 a.d. rules against drama. the church took over many functions of leadership in

Dancing in the Dark Ages (Middle Ages) - . what does the middle ages remind you of?. knights. castles!. periodization.