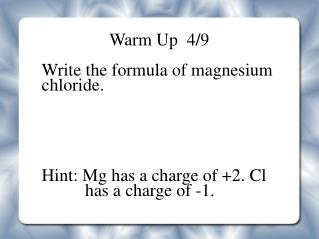 Warm Up 4/9 Write the formula of magnesium chloride.

Warm Up 4/9 Write the formula of magnesium chloride. Hint: Mg has a charge of +2. Cl has a charge of -1. Gas Laws. Lesson : Kinetic Molecular Theory. Solids/Liquids/Gases. Describe the molecules in the following images.

Warm Up 4/9 Write the formula of magnesium chloride.

Ch4 – Types of Chemical Reaction and Solutions Ch4.1 – 4.3 Water, Electrolytes, and Concentration - . this is the

Chapter 5. Atoms and Molecules - . atoms are the smallest particles of an element that can exist and still have the

Solution - Sample exercise 4.1 relating relative numbers of anions and cations to chemical formulas. the diagram below

Chloride - . what a difference a d makes!. chloride is not chlorine. measuring chloride is acquiring information about a

Review of Ionic Compounds - . in an ionic compound, one element [ non-metal ], can strongly pull electrons away from

CHAPTER 4 CHEMICAL REACTIONS: MAKING CHEMICALS SAFELY WITHOUT DAMAGING THE ENVIRONMENT - . from green chemistry and the