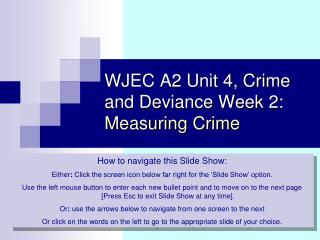 WJEC A2 Unit 4, Crime and Deviance Week 2: Measuring Crime. How to navigate this Slide Show: Either : Click the screen icon below far right for the ‘Slide Show’ option. Unit 7: Crime Scene and Physical Evidence - . crime scene : anywhere evidence may be located that will explain events, it

Jobs and Crime - . week one: tuesday &amp; thursday. summary for lecture two. crime is an economic problem loss of

Privileged Deviance - Overview. the term "white-collar crime" was coined in 1939 during a speech given by edwin