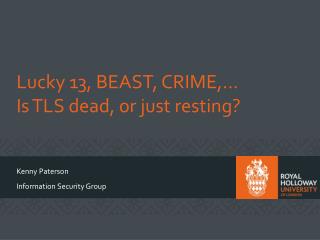 Lucky 13, BEAST, CRIME,... Is TLS dead, or just resting?. Kenny Paterson Information Security Group. Overview. Introduction to TLS (and why YOU should care) BEAST and CRIME Lucky 13 and RC4 attacks Current/f uture developments in TLS. A Word from my Sponsors. Crime or Sport? - . the development of modern prizefighting. i. the cultural and legal setting. legal and religious

or Just Who is My Brother? - . tests of fellowship. the churches of christ are divided over the doctrine of grace— and

Were the 1994 Expos Just Lucky? - . estimating the “real” skill level of a team phil birnbaum –

Performance Evaluation and Active Portfolio Management Or figuring out if you or your manager is good or just lucky!

PRINT IS DEAD. - Print is dead. why are there expectations of a photographer to include moving image?

IS CHIVALRY DEAD? - Discussion planes. is chivalry dead?. you will be put into groups of 3: one pilot, 2 co-pilots i will

Dead or Alive - . wanted for murder, robbery, and disgracing the dead. known for kissing her victim after murdering them