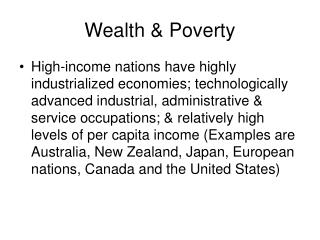 Social Class in the U.S. Chapter 11 - Introduction our culture encourages the attitude that poverty and wealth are the

Impact of Poverty on Education - Marcia melton edci 6300 summer, 2007 introduction the united states has about 74.5

POVERTY IN CAMBODIA - 26% of the cambodian population live below the poverty line. the average daily income is less than