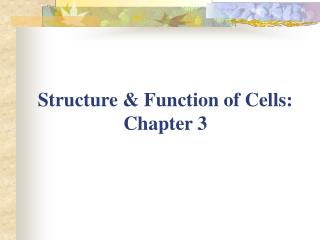 Structure & Function of Cells: Chapter 3. MODERN CELL THEORY. 1. All living things are made of one or more cells 2. Cells are the basic units of life and all the chemical reactions of life occur in cells 3. All cells arise from preexisting cells. Cell Requirements.

STRAND 1: Molecules and Cells Biology Standard 2 - . students shall demonstrate an understanding of the structure and

BIOLOGY END OF COURSE TEST STUDY GUIDE Content Domain 1: Cells - The ________ is the basic unit of structure and