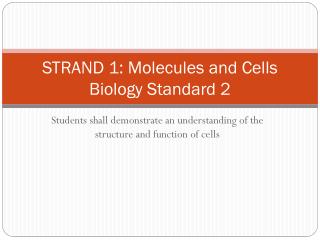 STRAND 1: Molecules and Cells Biology Standard 2. Students shall demonstrate an understanding of the structure and function of cells. The Goals. MC.2.B.1 Construct hierarchy of life from cells to ecosystems MC.2.B.2 Compare and contrast prokaryotes and eukaryotes MC.2.B.3 Nature of Matter - . tiffaney mathis adrian p. defante. objectives. knows the weight of an object is always equal the sum

The Molecules of Cells - . . . how do monomers become polymers?. chapter 3the molecules of cells. dehydration

Cell Biology - . mark mayo cypress college. last update 9/10/13. cell theory. all organisms are made up of cells all

Why size and shape matters - . cells need to maximise their surface area to ensure the rapid movement of molecules.

Clicker Quiz - . atoms and molecules - have your clickers ready!. is this thing working? . yes. no. pickle. 1. covalent

Why size and shape matters - . cells need to maximise their surface area to ensure the rapid movement of molecules.

Basic Biological Principals - . what is biology?. biology is the study of life 7 characteristics of life cellular

Tweeting our conference… - . we’re on twitter. #cltasb12 strand hashtags: strand a = #wl21c strand b – ask your

Atoms and Molecules - . basic units of everything!. “atom” and “molecule” mean the same thing. atoms are made of