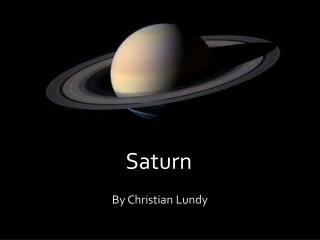 Saturn. By Christian Lundy. How Did Saturn Get Its Name?. Saturn is named after the Roman god of agriculture, whose Greek counterpart is Cronus, the father of Zeus/Jupiter. When Was Saturn Discovered?. Saturn was discovered by Ancient Civilizations, so no one knows exactly