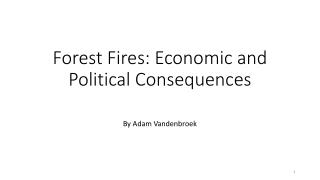 Forest Fires: Economic and Political Consequences. By Adam Vandenbroek. Economic Consequences of Forest Fires . Forest fires have a big impact on a country’s economy. It costs a lot of money to fight a forest fire and recover from it. Consequences of Forest Fires - . extinction of

Forest Fires - What is a forest fire?. fire is the most spectacular natural disturbance that affects canadian forests.

Forest fires - . 104. do you want to know why forest fires run faster uphill than downhill? check out my poster!

Forest Fires and Climate Change in Canada - . canadian fire statistics. incomplete prior to 1970 currently - average of

Political and economic realities - . having read paul krugman. (6) if i invest $5 billion to build a nuclear power plant

Political and Economic Systems - . main idea. the world’s countries have a variety of government and economic systems

Political and Economic Systems - . totalitarianism. a political and social system in which the central state completely