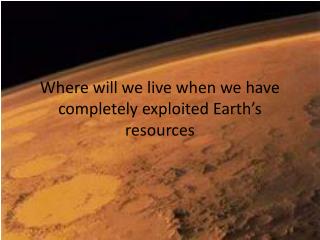 Where will we live when we have completely exploited Earth’s resources. Terraforming Mars. Making Mars capable of sustaining life . What do you need to sustain life on Mars Oxygen Water Warmer Climate Avoid high levels of Solar Radiation . Step #1 – Global Warming. Mars is cold

Unit 4 Human Impact on the Environment - . humans depend on their environment for: food water shelter clean air.

Terraforming - . john tobin. what is terraforming? -- planetary engineering to make a world more earthlike why study

The Natural Environment and the Human Economy: - . an ecological perspective. the biosphere and human

Adaptations - . an adaptation (or adaptive feature ) is an inherited feature of an organism that enables it to survive

Exploring Natural Resources - . lesson. what is around you?. examine your surroundings, write down everything that is