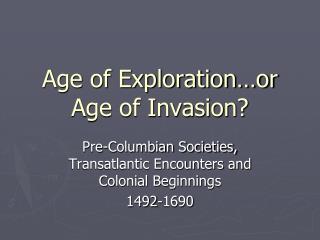 Age of Exploration…or Age of Invasion?

Age of Exploration…or Age of Invasion?. Pre-Columbian Societies, Transatlantic Encounters and Colonial Beginnings 1492-1690. In the beginning…. Small Diomede islands are all that remain above sea level today. Beringia : mankind’s gateway to America. Early inhabitants of the Americas.

Age of Exploration…or Age of Invasion?

Objective - . tsw analyze documents of cabeza de vaca and the events and issues related to his exploration of texas by

The Invasion of Sicily - . the united states and britain defeated the germans in northern africa at the end of 1942. the

The Invasion of Grenada - . october 1983. background. grenada is a small island located in the carribean . grenada was a