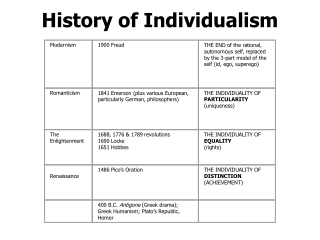 Modernism. 1900 Freud. THE END of the rational, autonomous self, replaced by the 3-part model of the self (id, ego, superego). Romanticism. 1841 Emerson (plus various European, particularly German, philosophers). THE INDIVIDUALITY OF PARTICULARITY (uniqueness). The Enlightenment. Thomas Paine: Architect of Cooperative Individualism - . a presentation on the life and legacy of the 18 th century’s