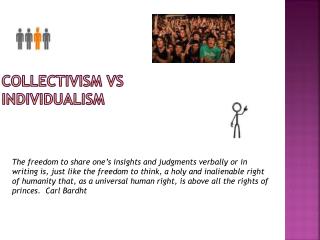 COLLECTIVISM VS INDIVIDUALISM. The freedom to share one’s insights and judgments verbally or in writing is, just like the freedom to think, a holy and inalienable right of humanity that, as a universal human right, is above all the rights of princes. Carl Bardht.